Gorkha Foundation is pleased to announce a new collaboration with Women for Human Rights (WHR) on an exciting initiative in Western Gorkha.

The foundation’s directors have been working closely with WHR Nepal on a concept model village to be pioneered in Chhoprak. The project, which takes a holistic approach to reconstruction and sustainable development, will focus on community leadership by local women’s groups.

At the core of the strategy is the establishment of a Women’s Leadership Committee which will oversee the development of a community center, Chhahari-safe space, toilets, water sanitation and healthcare provision, local microcredit initiatives, teacher training, an e-library and school building reconstruction. It is envisaged that under the group leadership of local women, these facets of the community will flourish to bring a new lease of life to the village and the surrounding area.

In April of 2015 after hearing news of the mega earthquake in Nepal, Akash and Harmony Pandey wanted very much to do something to help the people in their father’s homeland. Harmony’s 6th birthday party was coming up and she decided to ask her friends to bring donations for earthquake victims instead of presents for the party. Soon after, Akash, who was 9 at the time, decided that he wanted to try to make T-shirts to sell in order to raise money. Akash worked to design a shirt and soon they were sent to the printers.
The children sent some of the money they raised in the campaign they were now calling ByKids4Kids to a family friend who was in Nepal at the time of the quake and was delivering immediate aid to victims. A member of his team was filming as Bash gave supplies to the children and told them that Akash and Harmony from America sent the supplies so that they can keep studying. One of the children replied that they cannot study because their school has been destroyed. After seeing the video, Akash and Harmony decided that they wanted to help rebuild a school in Nepal.
Akash and Harmony sent the rest of the money they raised to the Gorkha Foundation to help build the Shree Mahendra Jyoti Primary School in Kerabari. Soon they decided that they wanted to go to Nepal and visit the school. In the summer of 2016, Akash and Harmony went to Nepal with their mother and father to visit family and to see the school in Gorkha.
It was a long journey. They left for Gorkha on a bus leaving at early in the morning, later they switched to a jeep and spent 4 hours on a super rugged road. Then they had a 4-hour hike straight downhill to Bhir Singh village. The name means steep horn, and the road is very steep, even by Nepali standards. However, they were so happy to arrive, greeted by the whole village. Soon all of the children were singing and dancing together. That night they stayed in one of the temporary shelters made of bamboo and tin that had been built since the quake. Even more than a year later, none of the homes in the village were habitable or rebuilt. Akash and Harmony felt lucky that the shelter was only a little leaky, but could imagine how difficult it would be to live in for a long time during the rainy season especially.
In the morning they hiked up to the new school situated in the beautiful, rugged mountains. The beautiful people who live there went all out to thank Akash and Harmony for raising money to help rebuild the school. The villagers dressed Akash and Harmony in local Gurung clothes. Akash and Harmony gave the school and the students the books and other school supplies they had collected with the help of their own school, Aspen Elementary School.

SUMMARY OF VOLUNTEER WORK IN CHHOPRAK

Five volunteers for the Gorkha Foundation spent a        productive few weeks in October 2015 at the village of Chhoprak and vicinity, in Gorkha District. The main venue was Chhoprak’s Mandali Higher Secondary School, where the Gorkha Foundation is constructing one of the new classroom buildings to replace what was lost in the April 2015 earthquake.

The five volunteers were—Joe Richards, an engineer from Portland, Oregon and former Peace Corps Volunteer to Nepal; Christoph Franklin, a hospital nurse specializing in wound treatment and health development advocate, from Portland, Oregon; Robert (‘Bob’) Wachman, an educator from California, who specializes in the training of Teachers of English as a Second Language; Susan Wachman, an educator from the Philippines who works with her husband Bob; and Don Messerschmidt, the group leader, a rural development specialist, former Peace Corps Volunteer to Nepal, and member of the Gorkha Foundation Board of Advisors. We were accompanied by Kapil Bisht, a Nepalese writer, who has helped document the Foundation’s work in Gorkha. Three of the group were former Peace Corps Volunteers in Nepal (Joe Richards, Robert Wachman, and Don Messerschmidt).

In Chhoprak: assisting the faculty in TESL teacher training ( Bob and Susan Wachman); some classroom teaching and discussion with faculty and students (the Wachmans and Don Messerschmidt), and an amazing calisthenics, sports and yoga demonstration with students and teachers (Joe Richards). And at the Chhoprak community health center, we delivered medical supplies and discussed local health services (Christoph Franklin).
In neighboring Jaubari, delivery of medical supplies (Franklin, Richards, and Bisht).

In Nepane and neighboring communities and schools: documenting the Gorkha Foundation’s new model school building developments, discussions with educators and students, and follow-up interviews and observations from Kapil Bisht’s earlier visit to Nepane and vicinity (Richards, Franklin and Bisht).

In AmpPipal: delivery of medical supplies (Franklin, and group members), and a group visit to the 16th century archaeological site of LigLig Kot, a large historic fortress on the hilltop.

We acknowledge the valuable assistance in the field by Ganesh Shrestha and Basanta Devkota of the Gorkha Foundation, and are especially appreciative of the warm hospitality by the Mandali school faculty and principal, and by community members at each place we visited.

Five teachers from Tacoma, Washington are volunteering for the coming months in Gorkha Foundation partner schools in Lig, Kerabari and Hansapur.

Analis A. Rivasplata, Aimee Yvonne Garcia, Luke Warren, Brenna Gowin and Samantha McIntyre – all graduates from Tacoma School of the Arts – are currently in the district to run English classes and assist teachers in some of the areas badly hit by last year’s earthquake and the ongoing fuel shortages. They are working closely with the Gorkha Foundation team to bring some of their skills, knowledge and enthusiasm to students at Sudarshan Lower Secondary School in Lig, Mahendra Jyoti Primary School in Kerabari and Bhachek Primary School, Hansapur, all of which are currently holding lessons in temporary shelters due to the extensive damage of the school buildings. The newly reconstructed Nepane High School in Kerabari is also receiving the teachers during their stay. 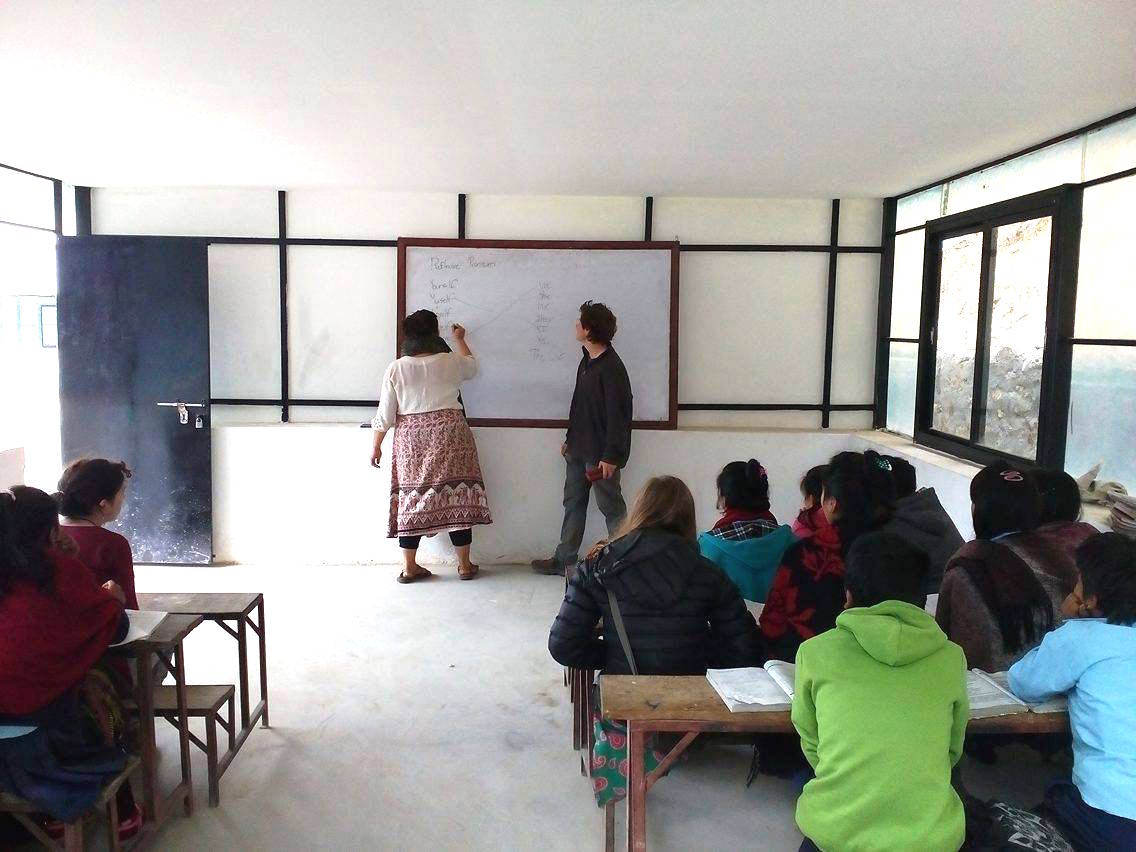 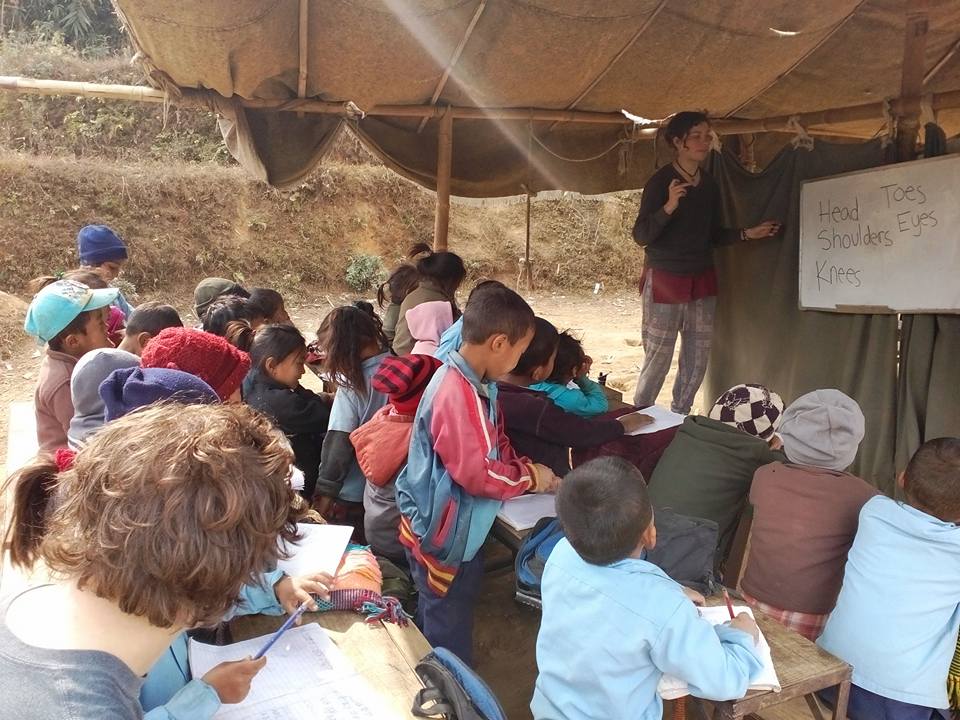